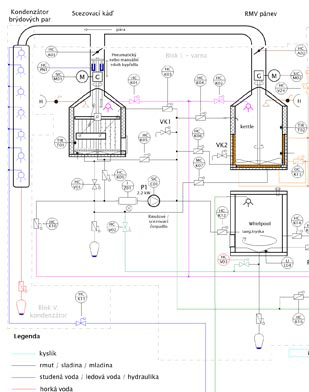 Manual control of the brewhouse, simple push-button control panel with basic control and sensing elements. Manually adjusted pipeline routes, switching of motors and pumps, temperature and times are watched by the brewer .

The semi-automatic control of the brewhouse with the support of PLC with most operations controlled from the central control panel with controls and sensing elements. The control panel is designed as a touchscreen – centrally are controlled motors, heating and opening and closing several important valves on the media pipes. The most valves and flaps on the brewhouse pipe system is controlled manually.

Automatically controlled brewhouse – with most computer- controlled operations – according to the specifications from a central control panel. The control panel is designed as a touchscreen. The brewer selects the recipe and starts the program that controls the production process. The brewer controls it, treats abnormal conditions and ensures the preparation and the brewing of raw materials for the process.

Automatic control of temperatures inside tanks using a central computer.