Technology for the fermentation and maturation process

Fermentation and maturation process – a secondary phase of the beer production

The brewing of hot wort which is the first phase of the production cycle of beer, is followed by a second phase, called the fermentation. Fermenting of wort is a manifestation of metabolism of brewer yeast. Yeast is added into wort after its aeration immediately after wort is cooled to the fermentation temperature after wort is pumped from the brewhouse to fermentation vessels.

Design and construction of tanks for the primary beer fermentation varies depending on the technology. In our craft breweries we use both most common fermentation technologies which can be used within one brewery also in their combinations and this allows to produce beer of different kinds and sensory properties.

I. The bottom fermentation of beer 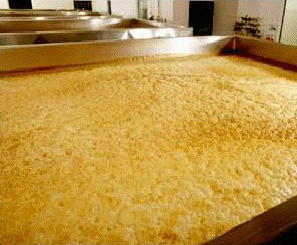 The bottom yeast fermentation is carried out at temperatures of 6-12 ° C and lasts for 6-12 days. Beer lies for a month or longer (from here the name “lager”) at low temperature which ensure, among other things, the dispersion of sulfur compounds created during primary fermentation.

For small breweries, there is a strong argument for the main beer fermentation in open vats – the great marketing asset. A view of the beer in the fermentation phase with many colour of the yeast foam is one of the main attractions for all visitors of the craft brewery.

Scheme of the brewery with the open fermentation technology : 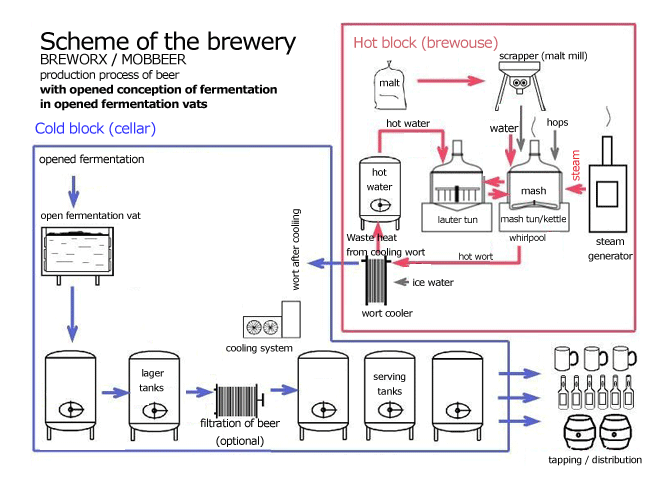 In modern breweries mainly the cylindrically-conical tanks are used for both bottom and top fermentation of beer. Although the quality of bottom-fermented beer from closed tank does not reach the quality of beer fermenting in open containers, the economic benefit is the decisive reason for the abandonment of traditional fermentation technology in other than small breweries.

II. The top fermentation of beer 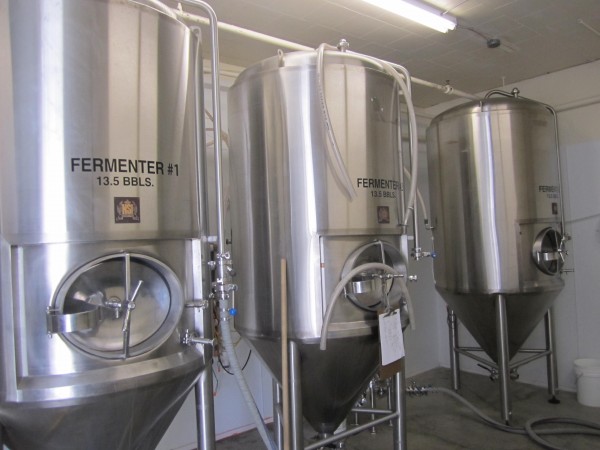 The beer style based on top fermentation includes all beers which used Saccharomyces pastorianus yeast. This style includes beers like Ale, Porter, Stout, Altbier, Trappist or wheat beer. Top fermentation process is carried out at temperatures of 15-24 ° C and usualy lasts 3-9 days.

In most cases, on the surface of fermenting beer there floates a foam caused by rising carbon dioxide together with active yeast. That is why these beers are called on-top fermented beers. The primary fermentation of these beers takes usually around three weeks, in some cases it may maturate for several months. Yeast clusters are grouped in colonies (they may have a diameter of several meters), live on the surface of wort and they produce carbon dioxide. Higher fermentation temperature causes more floweriness of final beer. On-top fermenting beers vary in flavours and we often can find exotic aromas in them (cloves, banana, grep, etc..), although the brewer did not add such ingredients to the beer. All this is caused by the top fermentation.

The best type of fermentation vessels for bottom fermentation is closed cylindrically-conical tank. The main reason for closed fermentation in tanks is susceptibility of top-fermented beer to contamination yeast foams by foreign organisms from the environment around. Another reason is the possibility of controlled fermentation and maturation of beer in one universal fermentor and easy cleaning and sanitization of all closed tanks.

Scheme of the brewery with the closed fermentation technology : 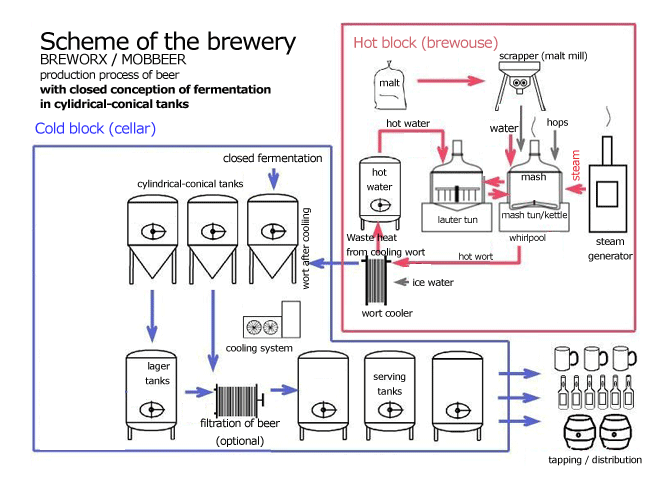 How to calculate the size and number of fermentation vessels

1. Calculation the size of fermenters

The main indicator that determines the useful volume of fermentation vessels is planned daily production volume of wort. This means the volume of wort, which we brew within 24 hours in one brew day. We usualy do not brew wort every day – at least one day of the week is done sanitation of the brewhouse.

Rule: We choose the next near higher volume of fermentation vessels depending on the volume of daily batch of wort.

2. Calculation the number of fermenters

Among the indicators that determine the number of fermentation tanks for primary fermentation, there are the time of main fermentation of the daily batch of wort,and a number of brew days that will take place within this time .

Note: The recommended duration of fermentation is the main part of each recipe for a selected type of beer. Yet the real time of the main fermentation can be one two days more or less, which is due to a number of factors, such as vitality of the yeast, the quality of malt, atmospheric pressure, ambient temperature and other influences. In reality for each batch only the main brewer decides on the termination of the primary fermentation according to measurement results of fermented extract by hydrometer. For the above reasons, we recommend to calculate the time of the main fermentation by at least two days longer than the recipe states. In practice this usually means we recommend to have one more fermentation container in the brewery as a reserve. Ignoring this recommendation may cause result in a lack of fermentation containers and reducing the planned production capacity.

Among the indicators that determine the number, size and type of containers for beer maturation, there are the recommended maturation periods (lying) of produced beer, the brewing daily volume of wort and the number of days that takes place during this period.

Rule: The number of containers for beer maturation in a brewery has to be at least as high as to allow the to place in the tanks all batches of beer that maturate in the same time.

Note : For special strong beers it is recommended to have beer maturation time of several months. To equip the brewery with maturation vessels for strong beers implies the need for extremely high amounts of maturation tanks in the brewery. This is not normally needed because the demand for strong beers in restaurants is usually not that big. In practice this extreme is solved in winter, when beer consumption with a lower alcohol content declines, the maturation tanks reserved for the basic assortment can be used (brewing schedule is temporarily reduced to the half of production volume) to produce special beers with more procentes of alcohol, while the maturation process takes place in tanks only as long as necessary for a few weeks, when it is not needed to use them for the usual summer assortment of light beers. Special beer is filled into stainless steel kegs stored in cold room, where maturation process continues. Therefore the empty maturation tanks are available for new batches of beer. Due to the long lifetime of beers with more procentes of alcohol it is possible to offer these winter specials from kegs during all remainder of the year, when the maturation tanks are used for production of usual assortment of weaker beers.

Technical parameters and descriptions of fermentors for the primary and secondary beer fermentation – maturation:

The technology of open fermentation in open fermentation vats in the dedicated fermentation room is typical mainly for production of the bottom fermented beers. The construction of the open fermentors allows especially convenient collection of foam from the dead yeast in the last stage of the primary fermentation which is a prerequisite for making a quality bottom fermented beer of traditional taste. This type of fermentors is typical mainly for Czech craft breweries.
Open technology is unsuitable for the production of top-fermented beer since the access of air to the live yeast active on the surface of the fermenting wort often tends to result in the contamination by undesirable organisms. This type of the beer fermentor is recommended for production of Czech lager Pilsner but also for other types of lagers, for example, Dortmunder, Beck, Marzen.

– pressure cylindrically-conical tanks for the secondary fermentation of beer/cider built in the compact modules :

FUIC – The compact fermentation units – the compact independent mobile devices with one up to four cylindrically-conical tanks which include all equipment that is needed for the primary fermentation of beer or cider, maturation and carbonation process under pressure, filling of carbonated beverage into kegs or bottles.

– pressure cylindrically-conical tanks for the secondary fermentation of beer/cider  :

Equipment of the CCT fermentors can be defined by customer or you can purchase the tanks with our standardly recomended accessories. 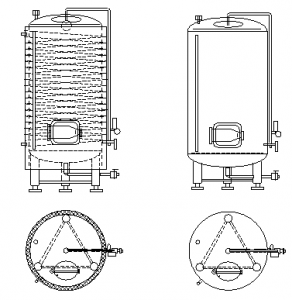 – pressure tanks for the secondary fermentation of beer/cider in four variants :

The primary beer fermentation process follows the secondary process of the maturation of beer in the maturation tanks (also called the lager tanks). During this production phase, the beer matures and saturates itself with the carbon dioxide, which is formed by the remaining yeast activity. This way the beer acquires the final savour. We produce the maturation tanks in four variants – insulated, liquid cooled, or non-insulated, air cooled. We offer the pressure beer maturation vessels with the fermentation apparatus which allows the adjustable pressure in the tank up to 3.0bar.

Modular cylindrically-conical fermentors – The CCTM are very versatile products from our own production portfolio which enable you to arbitrarily assemble the fermentor for the production of beer/cider/wine in currently required configuration.

The configuration of the fermentation tank can be changed at any time, even during full operation when the tank is pressurized and just filled with a beverage within its fermentation of maturation. It is not possible to reach this with other type of fermentors. This possibility saves your costs because you need only several universal tanks for more phases of the beverage production process.