Cold block – equipment for the cold process of the beer production

II. Devices for the fermentation and maturation process

>>Technology for the beer fermentation and maturation process – general description

FUIC – The compact fermentation units – the compact independent mobile devices with one up to four cylindrically-conical tanks which include all equipment that is needed for the primary fermentation of beer or cider, maturation and carbonation process under pressure, filling of carbonated beverage into kegs or bottles.

Equipment of the CCT fermentors can be defined by customer or you can purchase the tanks with our standardly recomended accessories.

Modular cylindrically-conical fermentors – The CCTM are very versatile products from our own production portfolio which enable you to arbitrarily assemble the fermentor for the production of beer/cider/wine in currently required configuration.

The configuration of the fermentation tank can be changed at any time, even during full operation when the tank is pressurized and just filled with a beverage within its fermentation of maturation. It is not possible to reach this with other type of fermentors. This possibility saves your costs because you need only several universal tanks for more phases of the beverage production process.

The technology of open fermentation in open fermentation vats in the dedicated fermentation room is typical mainly for production of the bottom fermented beers. The construction of the open fermentors allows especially convenient collection of foam from the dead yeast in the last stage of the primary fermentation which is a prerequisite for making a quality bottom fermented beer of traditional taste. This type of fermentors is typical mainly for Czech craft breweries.
Open technology is unsuitable for the production of top-fermented beer since the access of air to the live yeast active on the surface of the fermenting wort often tends to result in the contamination by undesirable organisms. This type of the beer fermentor is recommended for production of Czech lager Pilsner but also for other types of lagers, for example, Dortmunder, Beck, Marzen.

MBT – Maturation beer tanks – we produce the pressure tanks for the secondary fermentation of beer/cider in four variants :

The primary beer fermentation process follows the secondary process of the maturation of beer in the maturation tanks (also called the lager tanks). During this production phase, the beer matures and saturates itself with the carbon dioxide, which is formed by the remaining yeast activity. This way the beer acquires the final savour. We produce the beer maturation tanks in four variants – insulated, liquid cooled, or non-insulated, air cooled. We offer the pressure beer maturation vessels with the fermentation apparatus which allows the adjusting of pressure in the tank up to 3.0bar.

II.3. Preparation of beer for the final conditioning and the filling into kegs, bottes or cans

Their typical feature is the certification of the tanks for pressure up to 3.0bar, since their main function is the filling of beverage into transport packagies (kegs or bottles) and dispensing of beer (in the adjacent restaurant). For carbonated beverage the important is to keep beverage under a higher pressure than is used in maturation tanks. Serving tanks that are manufactured and supplied for our breweries are the same construction as the beer maturation tanks. It means that any beer maturation tank can also be used as a service tank and vice versa. This solution simplifies and accelerates the process of beer production because it is not necessary to pump beer from storage tanks to service tanks but simply by increasing the pressure in the maturation tank we can change its funstion in a few seconds without other interventions.

After completion of the maturation phase of production in maturation vats or cylindrical-conical tanks (depending on the selected fermentation technology) the beer is moved into the serving tanks. Bright beer tanks, serving tanks, also called the beer conditioning tanks, and also the beer storage tanks, are the containers structurally identical to maturation tanks.

Equipment to store and regenerate of the brewer´s yeast for further use. It is made for all size and categories of breweries. We produce insulated or non-insulated variants of yeast storage tanks and regenerators. Use of the yeast storage tanks ensures the keeping of the brewer´s yeast in sterile environment and the allows a required care for yeast to reach long life and high vitality of the yeast culture. The yeast regeneration tanks are intended mainly for smaller craft breweries. 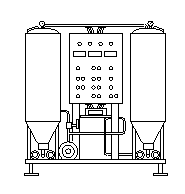 Yeast propagation stations for the growing the brewer’s yeast culture

The yeast propagation station is a very sofistic device where the pure culture of brewer’s yeast is multiplied in a sterile wort usually under aseptic conditions. A brewery that owns a propagation station does not at risk to buy infected yeast and does not depend on its competition, from whom it would must otherwise purchase the yeast.

Hops extractor – equipment for extraction of hops into cold beer

Final flavorization of beer by hops extraction is part of the beer production process which is often used in the United Kingdom, Scandinavian, North-American or Australian breweries. The hop is added to the carbonated cold beer in beer conditioning tank before its filling into bottles, kegs or cans. We offer the Hop Extractor – a typical equipment for the adding hops aroma into cold beer which is used in the most breweries for production of traditional strongly hopped beer types like IPA, EPA, APA etc. This process is usualy called : dry hopping, cold hopping.